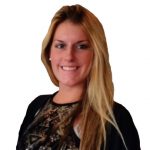 Since joining the RLS-CMC, Inc. team, Jasmine Bormann has brought the company to the number one seat in the industry, as ranked by the Top 10 DAS & Small Cell Consulting Companies of 2019. She came to the company in 2017 after a successful career in marketing B2C products, playing an integral role in increasing the company’s overall product sales by 66.7%, as a direct effect of her marketing strategies. Some of her accomplishments include being an active contributor on Forbes.com through her position as a member of the Forbes Communications Council, which is an elite, invitation-only organization for senior marketing and communications leaders. She graduated at the top of her class from Aurora University. Her accolades include Cum Laude and Alpha Mu Alpha honorary. Her biggest impact while attending Aurora University was acting as a pillar to the organization while establishing the University’s Marketing Solutions Team, which contributed to 17% of the total income for the University’s American Marketing Association chapter, which ranked 3rd in the nation at the time.